Here is a list of some of my projects. This list unfortunately excludes private projects or projects that for some reason never saw the light of day. 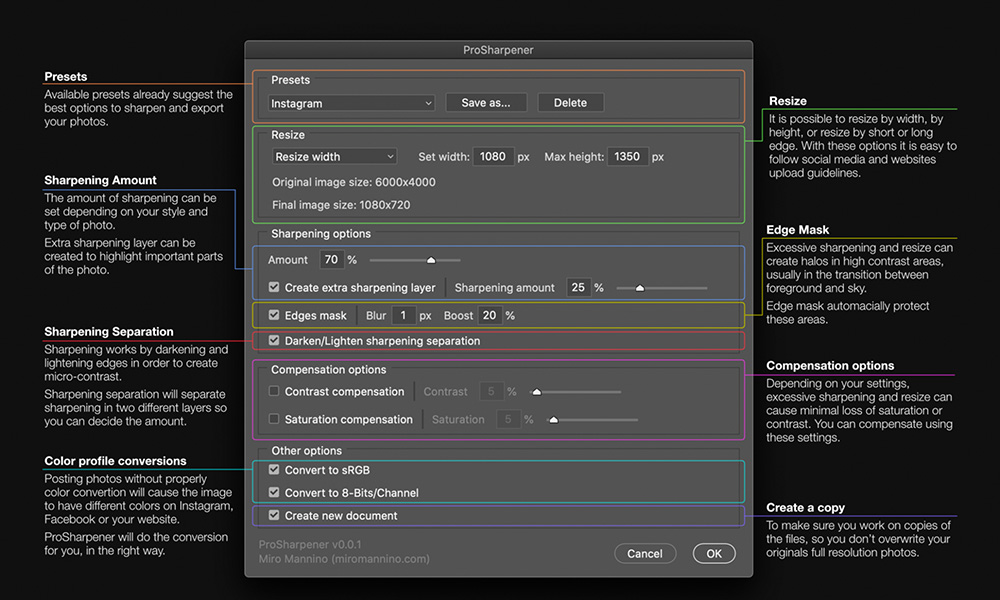 ProSharpener is a plugin for Photoshop to sharpen, resize, and execute many other operations in your photos. Important features: algorithms for the creation of edges mask to avoid sharpening halos, and sharpening separation.

sPaQL TooLs is a Stochastic Package Query Interface for Scalable Constrained Optimization. For example, given uncertain predictions for future stock prices based on financial models derived from historical data, sPaQL TooLs finds and displays to the investor a set of trades that will maximize the expected future gain, while ensuring that a loss will only happen with a certain probability.

This project won Best Demo Award during the VLDB’20 conference. 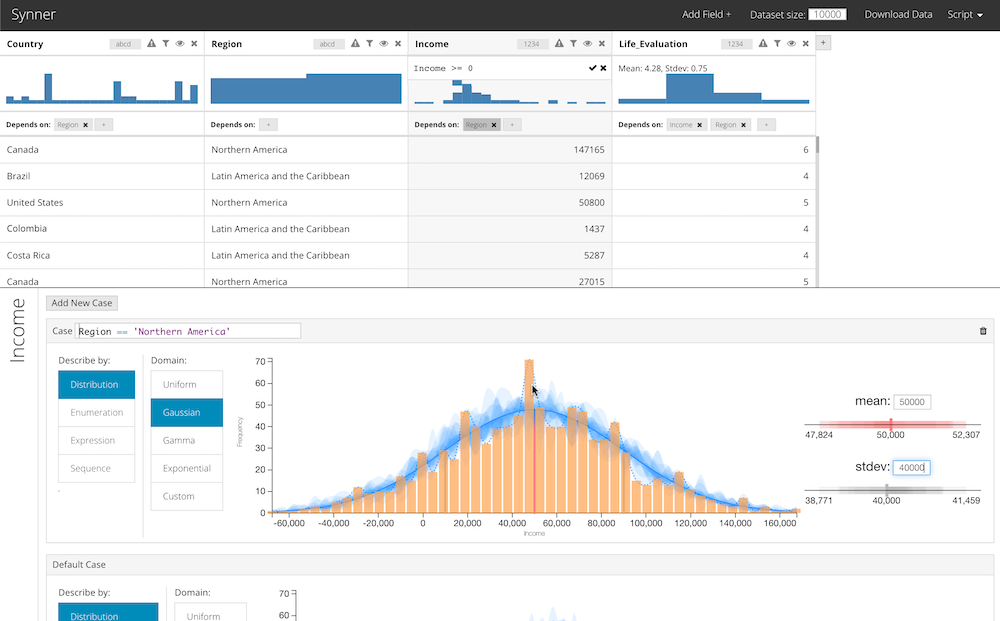 Synner is a tool that helps users generate real-looking synthetic data by visually and declaratively specifying the properties of the dataset such as each field’s statistical distribution, its domain, and its relationship to other fields. 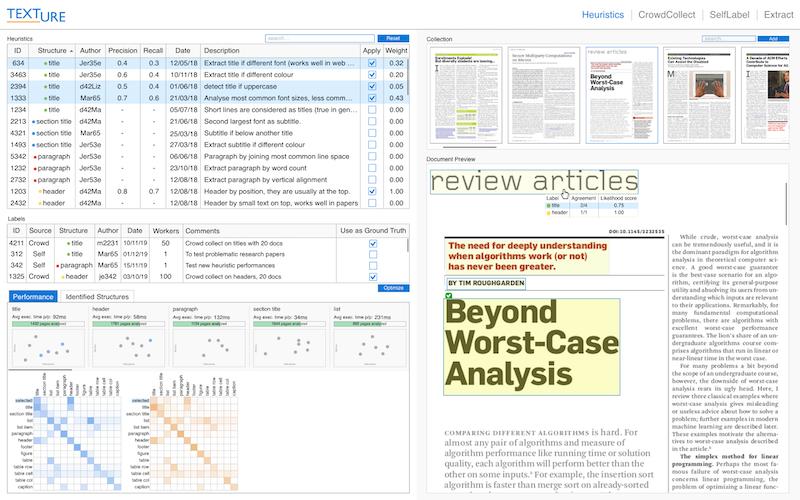 Texture is a framework for data extraction over PDF documents. Developers write and manage heuristics, while Mturk workers and end-users contribute by providing ground truth. 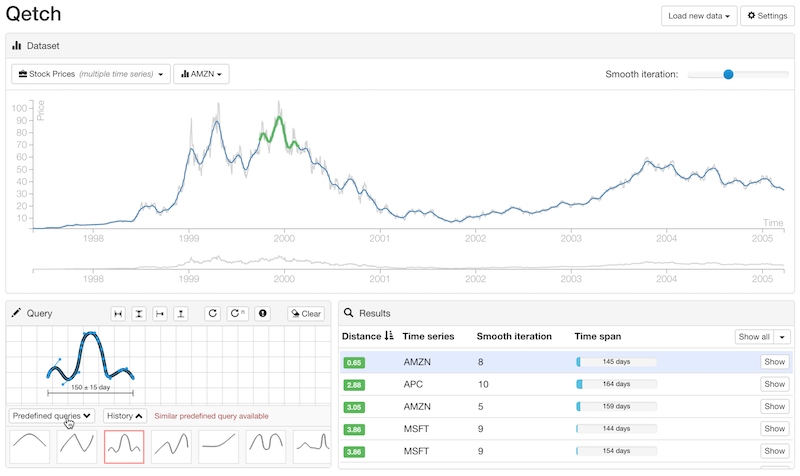 Qetch is a tool that allows users to freely sketch patterns on a scale-less canvas to query time series data without specifying query length or amplitude.

This project won Best Paper Award during the SIGCHI’18 conference.

A productivity tool for moving and resizing windows by only using the keyboard. 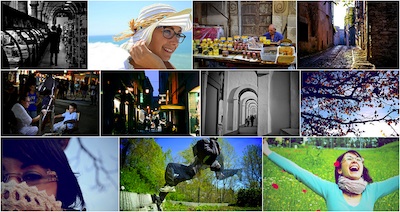 Javascript library to help creating high quality justified galleries of images. Used by thousands of websites as well as the photography community 500px.

During my experience at CRIF S.p.A. I was the main developer for the new version of StrategyOne, a multi-purpose decision engine used to calculate credit scores in Italy (i.e. Eurisc) as well as in other countries and companies. This new version is able to manipulate hierarchical data by using a custom language and other graphical components. There was an average of 93% performance gain over the older version, despite the latter was only able to work with simpler tabular data.

A scratch card game for Android I made for an university project. A social experiment, as I like to call it, that had more than 150.000 downloads.

A tool to help users to import contributions to GitHub from private git repositories, or from public repositories that are not hosted in GitHub. 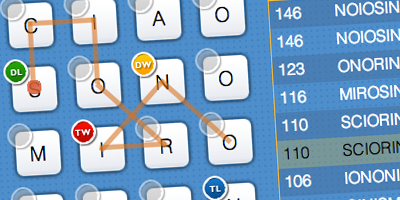 A fast solver for Ruzzle, used by more than two million users. 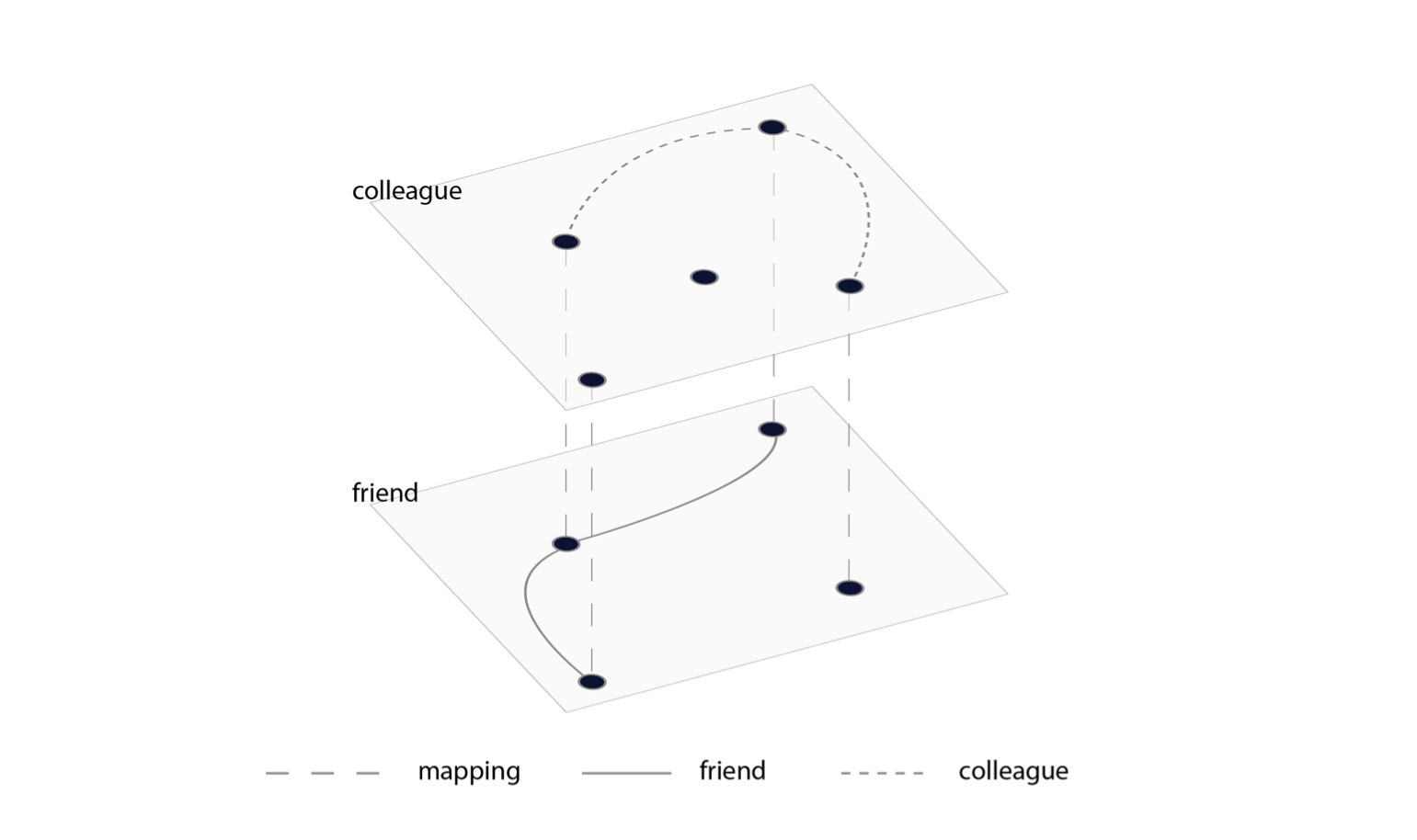 The aim of this project is to create a model and query language for multi-level networks analysis. For example we have a network (e.g. LinkedIn) where people are connected if they are colleagues, and another network (e.g. Facebook) where people are connected if they are friends).
It is based on path pattern recognition algebra. It provides selection, projection, aggregation, join, and synthesis operators.
This project is exhaustively described in my Master Thesis (in Italian).
This project contains the code for the implementation of the model, and the operator as defined in the thesis to query the data.
Project page
2013 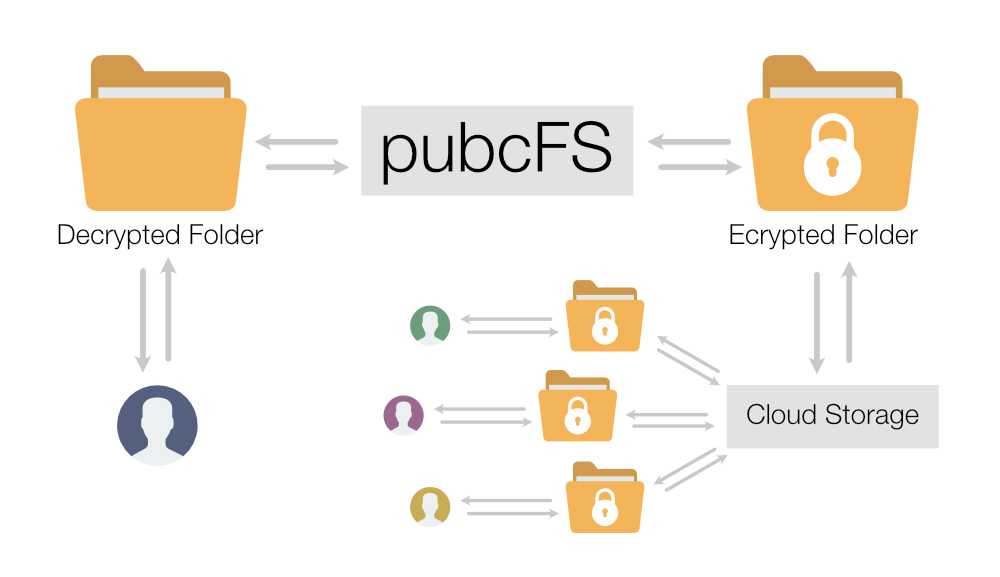 pubcFS is a virtual file system that encrypts folders and files on-the-fly. It uses asymmetric keys (i.e. RSA) in order to make it possible to share the encrypted folders with other users.
It is implemented in C, using FUSE, which make it possible to install this filesystem in the userspace rather than in kernel space.
Project page
2011 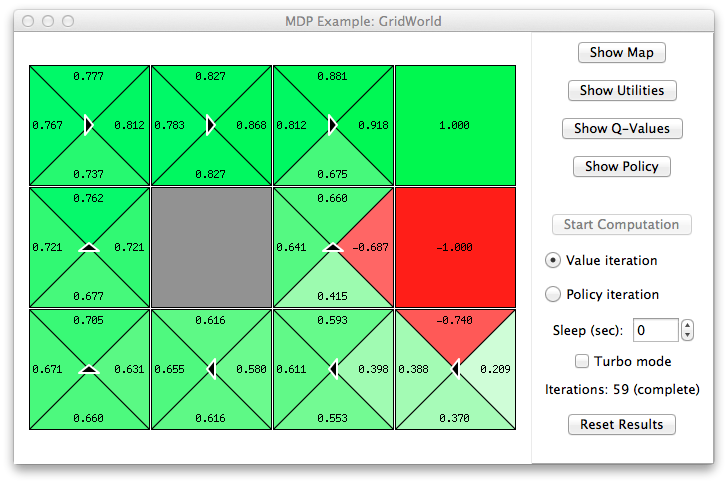 Simple GUI and algorithms to play and learn Markov Decision Process developed for a talk I conducted about Artificial Intelligence.

A simple Alfred Workflow to control Wi-Fi. It can turn on, turn off, toggle or restart the Wi-Fi.

Plugin that allows you to show your Flickr photostream, photosets, galleries, group pools, or tags in your WordPress blog, with an elegant compact layout, using Justified Gallery. 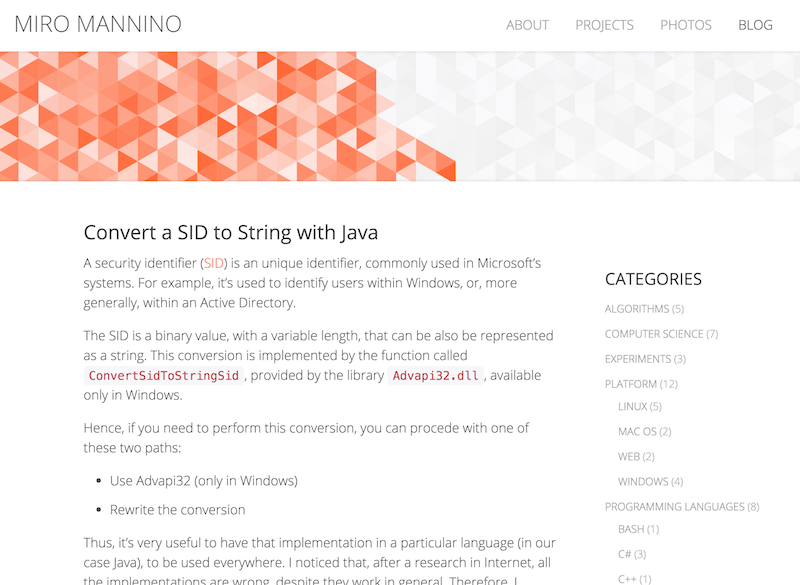 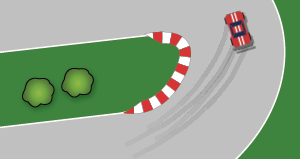 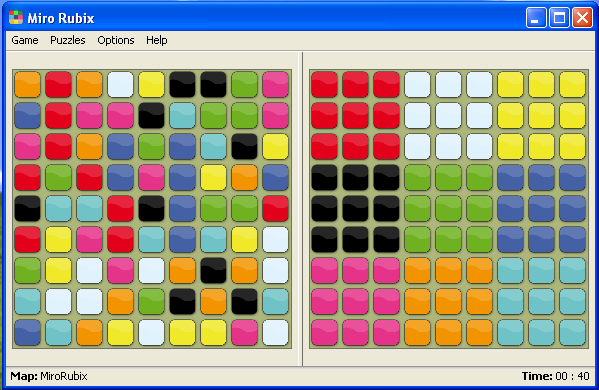 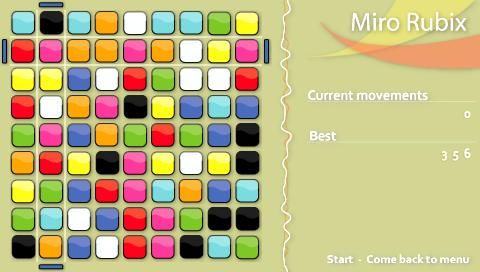 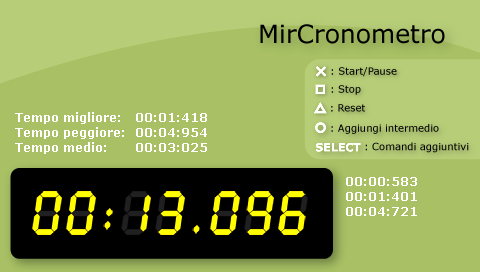 An accurate stopwatch for for PSP®. It evaluates best time, worst time, and the average time. It works also when the PSP® is in standby mode. Capability to memorize intermediate times. You can use it as a metronome.
Project page
2007
Other projects will be added soon…
We use cookies to ensure that we give you the best experience on our website. If you continue to use this site we will assume that you are happy with it.OkRead more